Robbery of the Manneken Piss 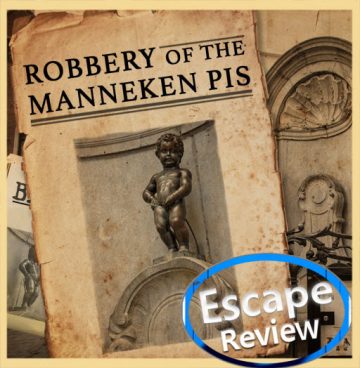 The game was fun, as with any other escape room, but the presentation in terms of decoration, music, special effects is disappointing. We can only hope that the next escape room from Escape Hunt Brussels will be more in line with the new trends around the world.

7.4
Total Score
You have rated this

The most famous statue of Brussels, symbol of the city, has been stolen once again. Locked in the hide out of the suspect, you will have to find the Manneken Pis and to replace it on its original base before the return of the thief: you only have 60 minutes and not one more to succeed! Brussels Escape Hunt

Simple theme: Solve the clues to find the statue.

There is not much difference between the Kidnapping at the opera and this room. It’s a linear game and the puzzles are based on the player’s attention to detail, with very little technology used (which in 2017 is a big no-no), and mostly using padlocks and logic. With not many surprises along the way, we had fun since there are some puzzles that we didn’t encounter before, but too little to keep us entertained.

The design of the room is simple, I may say even too simple, and with the upper part and ceiling 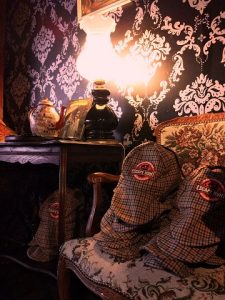 reserved for technical objects not related to the game per se , it doesn’t do anything to immerse the players in the atmosphere. As in our previous review we coul d hear the people in the other rooms next to ours and also the Game Masters on the hallway.

Furniture and props are in line with the story, music is running in the background, and that’s about it.

The hint system is based on a phone, and when asking for the hint you may hear other people talking on the phone with the Game Master. Strange implementation.

As explained Kidnapping at the Opera, there is no Game Master per say. They can see what you’re doing in the room, but there isn’t someone dedicated to watching the players at all time. Since there is a monitor or two in front of each room,they are running from room to room to check your progress. They do call if they see that you didn’t progress in a timely manner and this time, we got a few extra calls..

There are 4 such rooms that can be played at the same time.

Minimum number of players is 2 which is perfect for a date or a quick gettaway.

As in the previous review, the reception area is very well done with props for photographs and free drinks or coffee / tea. 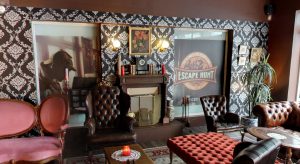 They are the first and biggest operator in Brussels with a huge number of rooms and several rooms on the same theme. This is very useful for teambuildings and corporate events where you can even have “battles” for who escapes first.
The rooms are first generation escape rooms with the main focus on locks and very little technology.

We’re still not very impressed. There is still one room from their portfolio to test which we hope will raise the bar so to say.

by Escape Reviews on Wednesday January 11th, 2017
The game is based on an Indiana Jones type of adventure. The main archaeologist is nowhere to be found and you and your team comes to his rescue, to continue his work. The story starts right after the disappearance of the archaeologist. Games and puzzles The room is non-linear, that means that we found ourselves […]
Top Rated Escape Rooms
Blacksad – Private Detective
8.3
128
Spaceship
8.2
The Mayan Temple
7.9
Sherlocked
7.8
Alice in Wonderland
7.8
Robbery of the Manneken Piss
7.4
Resident Evil
7.3
Copyright © 2020 Escape Reviews, All Rights Reserved.


Fonts by Google Fonts. Icons by Fontello. Full Credits here »
We use cookies to ensure that we give you the best experience on our website. If you continue to use this site we will assume that you are happy with it.I agree